It has been easy to dismiss Rolinda Sharpies as a painter of genre works: with ideas above her gender and talent, in apparently wanting and failing to make the best art, “great” art.

Rolinda Sharpies came from a family of professional painters. However, as a child her artistic talent was lost in her gender and she was only given the education necessary for the accomplished amateur. Her mother was a professional painter only out of a sense of financial insecurity and didn’t consider Rolinda as needing to be prepared for a professional career.

James Sharpies died in 1811 and Rolinda, her mother and brother settled in Bristol. It was in these newly-straitened financial circumstances that Rolinda began working as an artist: in 1812 she took a room in their hired house for use as a studio, and in 1813 she took her first commissions. They were for portraits, and portraiture formed the basis of her financial security until her death.

Rolinda wanted to be acknowledged as a good artist. To do this she had to make what was seen as a large step upwards, away from portraits (another “second-class” form of art) to the subject matter and techniques that attracted the highest praise and prices, that made up what was considered to be “great” art. Hoping to become more widely known, from 1817 she painted for exhibition in London, at The Royal Academy and The Society of British Artists. It is this wish to paint “great” art that can be seen as a failure. This is a judgement which does not take into account the obstacles a woman without much money had to overcome.

It was not possible for Rolinda to study how to make “great” art in the normal way of a young male student. The life classes at The Royal Academy were closed to her as a woman, and she didn’t seem to have tried to change the rules that kept her out. Even if the classes had been available she couldn’t have stopped her portrait work to attend them. Nor could she afford a long period of study in the studio of her current master. She had to do the best she could with the aids and the time that were available to her as a relatively poor woman.

She studied human anatomy from books and public lectures. She went to look at classical sculpture in museums and private galleries, and bought plaster casts for copying at home. She visited galleries and studios in London to view the “great” art of the past and its present exponents. In 1812 she had begun to teach herself to paint in oils, a medium not used by the rest of the family. She took a lesson in how to make up an oil palette. She took eleven lessons with the artist Philip Reinagle who painted murals and landscapes in the Dutch style. She painted copies of certain old master pantings, probably for both technique and ideas of subject matter.

She tried to put all she was learning into the series of non-portrait paintngs she began in 1817 as well as for people looking for where to buy oil paintings in Singapore. She tried candle-lit interiors, biblical scenes and romantic landscapes. However, the grand concepts behind these works were not matched by their execution, which illustrates the problems with scale, perspective and technique which a woman artist, attempting to educate herself, was bound to confront. Monumental figures and large gestures seem to have been particular problems for her, illustrating the importance of the Life Class to the would-be maker of “great’ ‘art. 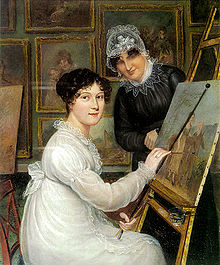 In the 1820’s Rolinda began to move away from the ideal of “great” art. She concentrated her main artistic efforts on the everyday world she saw around her in Bristol. In several of these paintings Rolinda herself appears as the observer of history in the making. The paintings show as much glamour and tragedy as “great” art. Rolinda continued to paint in oils, but rejected the monumental scale of “great” for compositions of small figures against their “genre” background.

The whereabouts of the majority of Rolinda’s paintings are still unknown because so few of her portraits have been located. In the period 1813-36 she painted about 90 portraits, against about 35 pictures of other kinds. She was a successful portrait painter, attracted wealthy clients and as many commissions as she wanted. Her portraits may still be in private ownership, or they may have been destroyed, nobody knows.

Rolinda Sharpies died of breast cancer in the midst of her career. Most of her paintings of contemporary Bristol remained unsold to form The Sharpies Collection in Bristol City Art Gallery. They suggest that Rolinda realised that she could not overcome the disadvantages of being a woman painter, and that she set out to make the best of the talent she did have. She may also have had to consider the sheer cost of painting on the large scale that “great” an seems to require. That she rejected “great” art for something that inspired her but which is always called “genre” art, “second-class” art, is more a problem of narrow categories than artistic talent.